iC2 CCTV has installed a major video and voice over IP CCTV system for Ealing Homes, one of London’s largest providers of social housing.

Live pictures from three 12 storey tower blocks and a local community centre in Acton – West London, are fed back to a fourth tower and then beamed to the central CCTV control room at Ealing Council – which is situated five kilometres away, via a wireless radio network.

Each of the three towers; Beaumaris, Corfe and Harlech Tower contain 90 apartments. They have all been refurbished and landscaped over the past three years under the government's 'Decent Homes Initiative' and Ealing Homes wanted to ensure that the improvements to the buildings were protected from vandalism and anti social behaviour.

iC2 fitted 32 cameras in each tower, one in each lift and one on each floor. Internally they installed Pelco cameras with speakers installed in vandal resistant perforated housings, linked to an Adpro DVR. PTZ tilt and zoom cameras were fitted in the car parks and entrances. 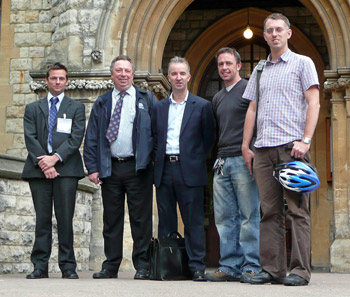 John Hassler of consulting engineers – Davis Miles and Partners, drew up the performance specifications and was the contract administrator. He said: "The original brief was that each tower and the community centre were to have stand alone systems. This subsequently changed as Ealing council began its conversion from analogue to digital HD CCTV and required a feed into their central control room. We needed to find a new solution which was reliable and cost effective."

iC2 provided the solution in partnership with 802 Global, a specialist in wireless IP CCTV systems. The wireless connectivity system they set up offered the client significant benefits over the more traditional cabling solution. Andrew Whelan, iC2's managing director explains: "The cost of hardwiring the three blocks and the community centre would have far exceeded the cost of the wireless system. In addition, the disruption to traffic from the road digging programme and the leasing costs of cable meant that a wireless link was by far the best solution."

Peter Wright, senior project manager for Ealing Homes, oversaw the project. He said: "The installation has been a great success and exceeded our expectations. The image quality is very high and there is no time lag or delay on the real time pictures. The system has allowed us to dramatically reduce problems such as vandalism, drug dealing, rough sleeping and anti social behaviour. The technology is reliable and flexible. We have enough capacity to increase the number of cameras if and when necessary. It’s a very impressive solution to a difficult problem."